Experience the excitement and energy of the ASHA Convention as we kick off our annual event with the Opening General Session on Thursday morning. 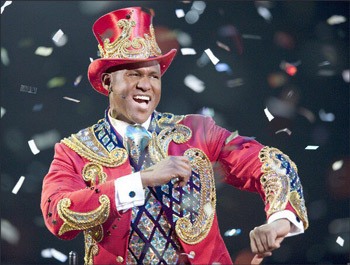 The Opening General Session kicks off the ASHA Convention! This popular event brings everyone together to celebrate the speech, language, and hearing professional community and celebrates our 2020 theme, “Reframe Your Thinking. Detours. Details. Discoveries.” You'll be welcomed by ASHA President Theresa H. Rodgers, who will share her insights about the state of the discipline. Then, Convention Co-Chairs Mark DeRuiter and Edie Hapner will preview what’s in store for you in San Diego this year—including special sessions, new events, and other highlights. Finally, we will welcome special guest Jonathan Lee Iverson as keynote speaker to share his story about how detours can lead to amazing discoveries.

Johnathan Lee Iverson got his start as a performer through his membership in the famous Boys Choir of Harlem. While a choir member, he traveled worldwide. During his travels, he had the opportunity to perform on some of the world’s most renowned stages and has sung for a number of world leaders and dignitaries, including United States Presidents George H. W. Bush, Bill Clinton, Ronald Reagan, and Jimmy Carter, as well as Noble Peace Prize Winner Nelson Mandela. Iverson shared the stage with artists such as Lou Rawls, Ray Charles, Stevie Wonder, Plácido Domingo, Luciano Pavarotti, Betty Buckley, Pete Seeger, Zubin Mehta, Perry Cuomo, Kathleen Battle, Shirley Verett, Tony Bennett, James DePriest, and Lena Horne—all before the age of 18.

Iverson went on to study voice performance and trained to become a professional opera singer while attending the Hartt School of the University of Hartford; however, his life took a detour when he was recruited fresh out of college by Ringling Bros. and Barnum & Bailey Circus. There, in 1998, he became not only Ringling’s youngest ringmaster but the first-ever African American ringmaster. Performing at approximately 450 shows annually across the United States and Mexico, Iverson’s presence as ringmaster led Ringling to set box office records.

Iverson spent 20 years performing with Ringling, but when the circus held its final show in 2017, his life took another detour. Since then, he has reframed his thinking about the identity he held as ringmaster to find new paths. Iverson is a captivating storyteller who now speaks to audiences about embracing life’s detours. He has learned that no matter the path, you get to where you’re supposed to be.

Join us on Thursday morning for Iverson’s riveting discussion of detours and discoveries at the Opening General Session. This inspiring event jumpstarts the ASHA Convention and will get you enthused and excited about the next 3 days!